U.S. imports hit a record in the first quarter of 2022, up 4.77% from an already record high in the fourth quarter of 2021, thanks to previously strong orders and consumer demand.

More specifically, transit times from China to the ports of Los Angeles and Long Beach have been reduced by 85%, from 50 days in December 2021 to 27 days in April 2022. However, it is still higher than pre-pandemic levels.

During peak congestion on the West Coast, customers divert cargo to East Coast ports, resulting in congestion shifting to the East Coast. Cargo transit times at the Port of New York increased from 40 days to 50 days, a 20% increase year-over-year and an 85% increase from pre-pandemic levels.

Shabsie Levy, founder and CEO of Shifl, said: “However, we expect congestion at East Coast ports to ease in the near future as the impact of reduced demand and blank sailings will be felt in the Port of New York, albeit due to transit times. Longer and a bit later than West Coast ports.”

But there is an imbalance factor. Labour negotiations between the International Terminals and Warehouse Union (ILWU) and the marine terminal operator will begin on May 12, the outcome of which is unknown. The maritime market has been concerned that if talks do not go well, operations at U.S. West Coast ports could be disrupted and increase congestion at East Coast ports.

In addition, the Shifl report stated that due to the impact of the pandemic, the freight volume of China-US trade routes has decreased, and the spot container freight rate has continued to decline. 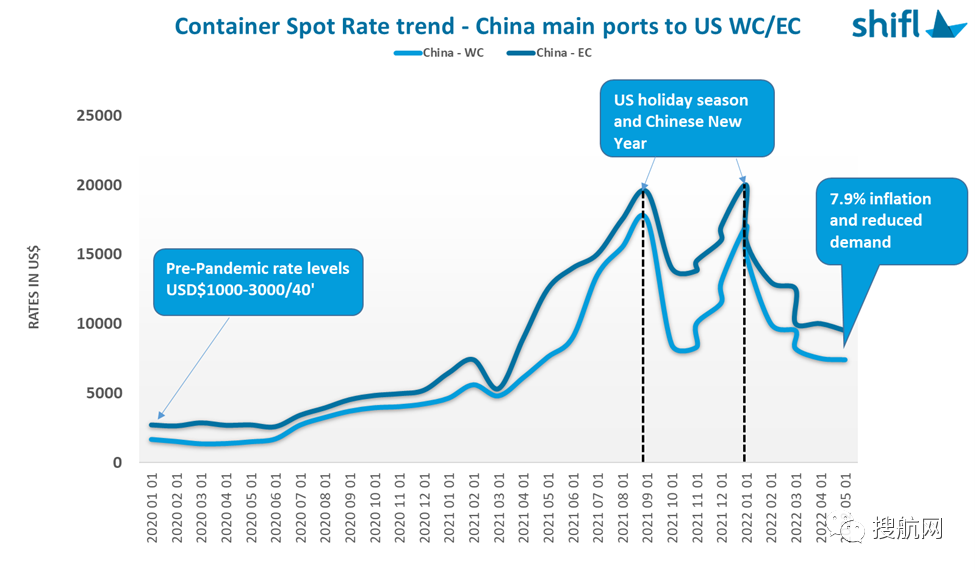 “As we previously forecast, the core reason for the continued decline in spot freight rates is the reduction in U.S. demand that we see from customer data. In April 2022, prices for 40ft containers continued to decline, with China-West US 7,000- $8,000, and China-East US around $9,000-$10,000,” Shabsie Levy said.

“Carriers have been trying to deal with falling spot freight rates by implementing blank sailings, while trying to lock shippers into long-term contracts in an attempt to extend their growth period.”

Previous : The service is professional and practiced, so the impression is deep
Next : Port of Los Angeles: Thanks to Ningbo Zhoushan Port, our cargo flow has not been affected by the Shanghai lockdown